Benjamin Morris has written a fascinating article about sumo history on FiveThirtyEight. There’s lots of interesting things in there, including the dominance of foreign sumotori and perhaps the cautionary tale for any nation: if you set the immigration bar too high, then the only people you let in are going to be good enough to beat you. No Japanese tournaments won by a Japanese wrestler for a decade? Oof, that’s gotta hurt. 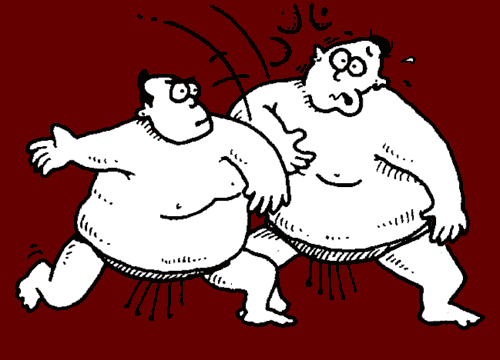 Action-packed sumo illustration from the Fudebakudo book.
Now read the article instead.

But what especially caught my eye is the discussion at the end about henka. In sumo this is basically abruptly getting out of the way so that the other guy (and for now, yes, it will be the other guy not the other girl) throws himself out of the ring for you. This movement is very much in line with teachings of aikido (it’s effectively what the basic step called tenkan seeks to accomplish, albeit sumo somehow gets it to work without a compliant uke) and as we know aikido presents itself as a moral and spiritual art. Getting out of the way is a good, noble thing. Got it.

But in sumo, getting out of the way is dishonourable. It’s what you do if you’re not good enough to deal with that other guy by staying in the way, see? Unfortunately for sumo, because you’re not supposed to do it, it works far better than would be the case if your honourable opponent trusts you not to try it on. So it really works (and Morris’s excellent article makes a case for a success rate approaching 92%), and will continue to work while it’s considered naughty. Fudebakudo-approved behaviour!

Lovely analysis and data visualisations over there too. Bravo Mr Morris!