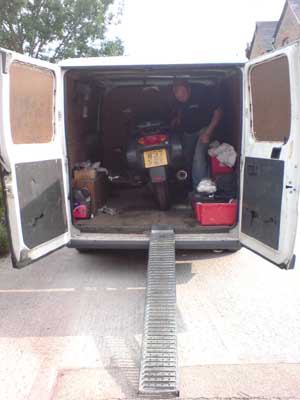 A final, sad view of Mr Bike being taken away in a van. I've obscured the number-plate so you can imagine it was FBD 1. For what it's worth, "Honda" is a genuine samurai family name.

This weekend saw the retirement of a much-loved member of the Exploding Pen team . . . Mr Bike was the unimaginatively named, two-wheeled, shaft-driven workhorse of the team. Technically speaking he was a Honda NT 650V, also known as the Deauville, unkindly nicknamed the Dullville or Duvet, and considered by more sporty bikers as one of the most unexciting bikes on the road.

Sadly Mr Bike started losing compression in one cylinder last year. On the last run down to Eastbourne he began backfiring rudely at innocent pedestrians. So his number was up — too expensive to fix, it was time to let him go. On Saturday he left in a van in a manner that seemed awfully reminiscent of the workhorse Boxer leaving Animal Farm.

If you've bought a copy of Fudebakudo through Amazon, or from a chain bookshop like Borders or Waterstones, then your book got to you thanks in part to the power of petrol exploding inside Mr Bike's 645cc engine and pushing his Japanese (actually, made in a factoy in Spain) pistons. It's one of the joys of self-publishing — no, really — that eventually you get your hands dirty in every part of the process. In this case that means doing runs down to one of the national UK book distributors, Gardners, to deliver consignments and collect signatures. (Incidentally, if you bought your copy from Foyles in central London, that may have been delivered by bike (there's no congestion charge for bikers in London — yet) although it is equally likely that I delivered your book by tube). 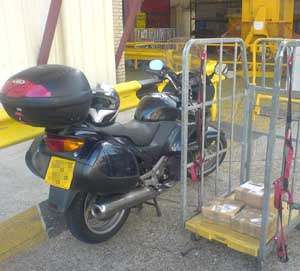 Happier days — Mr Bike next to a pallet at the book distributor's warehouse. I loaded that pallet myself, with my own hands. Artist's hands.

On the last run down to Gardners, nobody was about in the goods bay when I arrived. So I punched the "Deliveries" button, which set off a satisfying industrial klaxon. About a minute passed and then the bay door rolled up. I could hear the 2001 music but that may have been in my head. Presumably the dry ice must have run out just before I got there too. And then they came out to unload the books with a forklift truck. Yes, they gave Mr Bike full cargo honours by coming out to unload him with a forklift.

Tim's sack barrow has no engine.

I got my signature on the POD (proof of delivery, don't you know) and we rode back, backfiring through the 30mph built-up areas of the A22, waking the sleepy villagers of Nutley and rattling the cultists of East Grinstead. I knew it was the end, but then Mr Bike must have known too. After all, he'd been given a respectful forklift send-off, which had never happened before.

So farewell Mr Bike. When the current consignment of Fudebakudo is exhausted, the next one will be delivered courtesy of Britain's unevenly managed and increasingly expensive railway system. I will probably be obliged to use Tim's sack-barrow. He bought it especially for hauling books for Seni last year. It has two wheels and can carry 50 books at a push . . . but it's just not the same.