Obviously, there’s only one drink the serious martial artist should be drinking. Well, apart from Japanese tea. Or the blood of vanquished enemies. Or Lucozade’s Way of Life drink. Or the fermented mare’s milk, kumis, that kept the thirsty Mongol warriors on top form through all that conquering. Anyway, apart from all those, I was thinking — of course — of Steven Seagal’s “Lightning Bolt” energy drink. The domain for that (lightningdrink.com) seems to have mercifully timed out, but there’s still his staggeringly queasy (warning: Mr Seagal — or his advertisement’s production crew’s director — has opted to objectify women in this piece) advert on Youtube for it. In the hands of a less unnerving or inappropriate person, that could safely be dismissed as a parody but, alas, with llama-Steven-sensei at the helm it was surely never less earnestly intended than any of the big man’s other appeals to our credulity. He’s been a secret agent for the White House, don’t you know? Or was it the Kremlin? A puppy, you say? No, no — never mind.

The point is, having said all that, PepsiCo’s watery potion “Pepsi Nex Zero” may very well be a new contender. Pepsi does have a track record for selling its drinks via the visual medium of martial arts: their high-production value Shaolin advert being an exemplar of martially artistic commercials. Their slappy-handy Mountain Dew one is another splendid effort.

But it was time to post to the Fudebakublog again because PepsiCo Japan are rolling out an especially bonkers advertising campaign which has desert ninjas and feathers and stuff in it. And which makes no sense at all (apart from the bit where the soaked ninja dries himself by the fire by holding his arms apart — that makes sense). But then I don’t drink Pepsi myself, so maybe if I did it would all fall together, and just seeing a great big, uh, barbecue troll and, um, a sword guy, and some other sword guy… and a horse… would make me realise I need to buy more of the stuff. I think it’s best not to try to understand any of what they’re showing you, but just, well, roll with it. Because whatever it is, it is awesome, as @Brian_Ashcraft, author of the post on Kotaku (where I encountered this) rightly says.

It starts with episode zero, which is probably because it’s got zero sugar in it, but in fact slyly appeals to my nerdy sense of correctness by acknowledging that counting is about offsets not fingers: 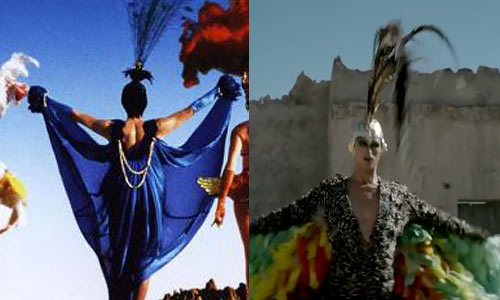 But you’ll want to know what happens next. Obviously. So, onwards to episode one: 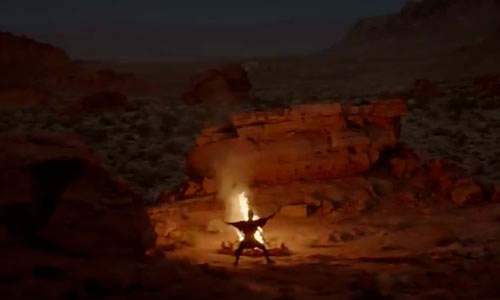 Now that is good drying technique. Watch episode one.

To be fair to PepsiCo Japan, who, bless their fizzy socks, have gone to the considerable effort of making this marvellous thing, I feel I ought to link to their official site. Presumably there you’ll be able to watch the story of Forever Challenge unfold, like a rebellious origami water bomb. With Pepsi in it.

OK, here’s a bonus “making of” link. This is clearly PepsiCo’s private Burning Man — these people must be having a great time. Also, the animal-costume in the boat at the end is just enough Where the Wild Things Are Max-y to be fabulous and discombobulating in equal measure. I hope they run to 100 episodes.