A couple of friends (Myf and Jed) have been sharing their illustration chops with me recently, so I thought it was about time I dug this painting out.

It’s a rendition of Miyamoto Musashi scowling at a flower, and it was done as a token of support for the opening of the new Heijoshin dojo in Brownhills, UK, in 2011. If all went to plan, the painting should be hanging up in the toilet there now. My admiration for Heijoshin (who practice the esoteric art of iaido, as well as kenjutsu and jodo) goes back to the maelstrom of cultural absurdity that was Seni 2003, where the Fudebakudo book launched, and where I first met Scott and some of his students. 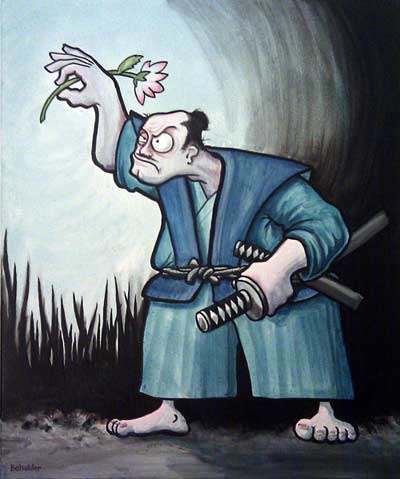 Musashi and the cut peony stem (informed, to some extent, by Musashi’s self-portrait). The man was accomplished with brushes as well as swords, which the Heijoshin logo recalls by referencing his famous Shrike on a dead branch.

Of course, the painting is a deliberately ludicrous representation of a clearly fictitious event, but nonetheless one that many people who have been hit on the head by a few too many wooden swords think is true. It’s true to the spirit of Fudebakudo, because Miyamoto Musashi was indisputably a real person — arguably Japan’s most famous swordsman if not, perhaps, the best — and the lineage of the sword arts in Japan is traceable, so his influence is genuine.

Naturally, there’s a lot of bullshit too. The Fudebakudo book childishly contains — without explanation — two entirely different accounts of how Musashi founded the nito-ryu school of sword fighting, to slyly point out how easy it is to make this silly and contradictory stuff up.

Anyway, the fictitious story of Musashi and the peony is originally from the novel Musashi, by Eiji Yoshikawa (yes, I had to put the word “fictitious” in italics there, because lots of martial artists get confused about that point). I’ve actually not read the book: I remember being told a version of the story over twenty-five years ago by the bombastic, unique and ultimately (in my opinion) wrong martial artist Gerd Kroell who was, at the time, studying sword from a credible source. Gerd died in 2001, but he told the tale so well, here’s his version, from memory; this is the Musashi I illustrated, above.

So, as you know, Musashi was travelling all over Japan, looking for teachers who were good enough to learn sword-fighting from. Any he found he would challenge to a duel. As his fearsome reputation spread, it got harder to find any who would accept the challenge. Either they hid, or else they didn’t and he killed them. Either way, it meant there was nothing he could learn from them, so he would move on, increasingly frustrated at the woeful state of expertise of the so-called masters.

At some point he made his way to yet another castle where he’d heard the lord had a reputation as a skilled swordsman. He strode up to the castle gates, and as he did so they slowly, but firmly, shut. He banged on them with his fist demanding to be let in.

“I challenge the so-called master here to a duel!” he shouted.

A long pause. Then a quiet voice from the other side of the gate. “No. Go away.”

“I demand a duel,” yelled Musashi, pounding on the gate. “Don’t you know who I am? I am Miyamoto Musashi, the greatest swordsman in Japan! I demand your master meets me in combat!”

Silence. Then, “The master knows who you are. Go away.”

“Why won’t he face me? Is he yet another coward and charlatan?”

Again, an infuriating pause. [I remember Gerd pulling faces as Musashi here, clenching his fists in frustration; he loved to tell this tale] “No, he just doesn’t think you are ready to learn from him yet.”

Of course Musashi exploded in rage on hearing this, and pounded and shouted and stomped some more.

Then, when he was running out of steam, the gate opened a tiny bit. A hand extended out, and gave the bewildered Musashi a single, cut flower: a peony. As soon as he took it, the hand retracted and the gates quickly shut.

Musashi yelled and spluttered some more. “What!? What is this? I am a warrior, not a florist! What the hell is the meaning of this? You try to insult me by giving me a flower? Preposterous! I demand a duel! Not petals!” And off he went again, stomping up and down in front of the castle gate, ranting and cursing.

Eventually he had to calm down of course, and that’s when he looked properly at the flower. He looked at where the stem had been cut. Then he saw what he had, in his anger, missed, and he suddenly understood. That cut was impeccable, clean, exquisitely precise.

So he knelt down before the castle gates and bowed:

“I humbly ask that I might become a student of this castle’s masterful lord.”

Well, that’s the story as I recall it was told to me, anyway.