It’s been quiet in the blog here. 2014 was a busy year for the things which prevent me doing Beholder projects (of which Fudebakudo, of course, is one). But I managed to spend most of December working on a forthcoming project with René (my brother-in-pens), which we’re hoping to release on the Beholder site in a month or two. It’s an interactive short story with René’s gorgeous illustrations and has a slight Fudebakudo flavour to it. 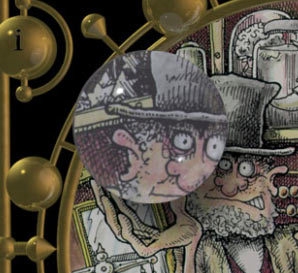 The mathemagician holds up a crystal sphere in Planetarium, because… well, because he does.

In the meantime — before we put that project live and announce it on this blog — I’ve also been working on updating the Beholder online puzzle story, Planetarium. Those changes went live today. If you’ve looked at Planetarium before you’ll see the illustrations are bigger and a little brighter than before, and it now uses the main Beholder site’s “responsive” layout (plays nicely on your mobile phone).