I’m pleased to finally announce the release of La Séptima Bala, an online short story, with gorgeous illustrations by my collaborator René, and told with a subtle bit of enforced interaction. Read it at www.beholder.co.uk/bala.

Early morning: the girl who knew the secret of the seventh bullet meditates on a rooftop. From La Séptima Bala.

We did the final artistic push on this at the end of 2014 (René and I live on different continents, so getting together to make art requires extra effort). All the line art in the project is René’s, but we went through to-and-fro refinement on pretty much every aspect that ends up in front of your eyes. We worked together physically on colouring the illustrations, which took much longer than most people who knew what we were up to seemed to expect. Perhaps by the end of this paragraph you’ll have formed your own opinion as to why this might be. Anyway… the story is set in the north of Mexico and we were extraordinarily careful both about how this informs the palette we used and how it runs through the development of the story. It turns out that “working together” means having long and bitter debates about details concerning, but not limited to, the butterfly (who knew that monarch butterflies‘ wing colours differ depending on whether they are migrating or not?), the snake, the snail, the sky, the ground, the architecture, the clothes, the history of the Mexican revolution, the quality of the tattoos of people walking past where we were sitting, the drinks we were having, the difficulty of finding power sockets in coffee shops, the dreadful mess Peter Jackson made of telling The Hobbit story… well pretty much everything really. We had, obviously, a wonderful time.

Here’s a little montage of René drawing and colouring. All the action took place in various coffee shops around Bangkok (mostly Rama IX), although René doesn’t drink coffee. If you look carefully you’ll see he’s actually sipping a glass of water (that’s pretty much all I allowed him, frankly) while the foo-foo drink in front of him is in fact my “fusion” iced chocco-tea with whipped cream and caramel. Yeah, I know; totally classy, me. (When I write, I drink black coffee, as dark as sin and as bitter as my heart; or neat single malt — honestly! this is true! — but, uh, not when I am colouring-in). 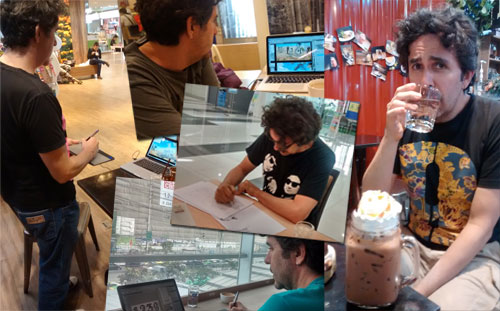 Brother-in-pens René at work (although, note that “work” here means not getting paid). I wasn’t goofing around not contributing, oh no… I was taking these pictures to document the process of making La Séptima Bala.

Some thankyous are in order to others who helped too, including those who joined in the “user testing” phase. I’m grateful to everyone who took the trouble to give me feedback (especially regarding some subtle parts of the click-to-progress mechanism, which inevitably resulted in material changes). Lots of people contributed to other things too, but I’ll call out just a few by name.

Finally, as usual for online Beholder projects, you can visit the site without being pestered by adverts and wotnot thanks to the ongoing presence of the server, which is powered by the generosity of sysadmin Mark (and JBB’s fat pipe).

La Séptima Bala has been a lot of work for what is actually just one page on the web. Please read it at www.beholder.co.uk/bala. I hope you enjoy it as much we we enjoyed making it together.