You are here: extras shuriken

In 2005, we attended Seni, the UK's biggest martial arts expo at the time. We took a large number (300) of chocolate-tipped gingerbread shuriken. We didn't quite sell them all — they were expensive, because replica weapons are — although those that remained were gobbled up at an aikido event just afterwards.

The shuriken were produced to our rigorous specifications by a local bakery, who did a splendid job, not least because dipping a biscuit in chocolate is easy unless it has six points. That last point is the tricky one. The shuriken were then bagged up with an informative label explaining the history of gingerbread shuriken. Sadly the software used to create the labels is now defunct, so although we can't perfectly reproduce the layout, the text survives, and is shown below. 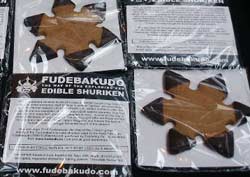 Fudebakudo edible shuriken, authentically packaged and kept out of reach of children.

This gingerbread shuriken is one of a class of kanzen hanzai yogu (literally, complete crime weapons) used by ninja to commit "perfect" assassinations, since the murder weapon can be destroyed (i.e., eaten) moments after the attack. Some rare examples of 18th century edible katana (swords), over four feet long and made from sharpened peppermint rock, survive to this day in private collections, mainly in Japan. The most sought-after are those crafted by legendary ninja confectioner Hattori Wagashi, and feature the kanji for "shinobi" running through the entire length of the weapon.

See also page 70 of Fudebakudo, the Way of the Exploding Pen, for details of the hard-baked rice-cake shuriken used by the Kata-Yaki clan.

THIS IS AN EDIBLE REPLICA. NOT TO BE USED AS A WEAPON

Initially, we thought we could craft our own shuriken cutter by repurposing "gingerbread man" kitchen cutters with tin snips and pliers. It turns out this is not so easy. After a number of disappointing results, we turned to experts and commissioned a custom cutter. 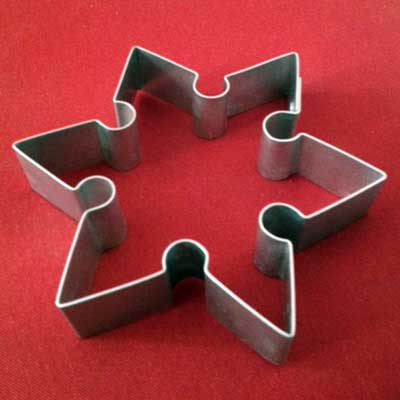 The Fudebakudo shuriken cutter. This got through customs without major incident.

We also discovered that the UK does not have anything like the cookie-culture that exists in the US, so in the end we had our cutter made and imported from the USA. For issues relating to cultural sensitivity, we did not get this made in Japan. This is partly because Hattori Wagashi remains a controversial figure (although his pieces are regarded as national treasures today, his allegedly accidental use of the wrong kind of sugar syrup was directly responsible for an entire clan being wiped out in the so-called Mizuame Misunderstanding of 1762), but also because the Japanese still make their cookie cutters in the traditional way, which means they fold the steel many times and return to the forge again and again, and frankly we were a bit short of time before Seni was due to start.

For obvious reasons, genuine recipes for weaponised gingerbread were ferociously guarded by the ninja clans that used them. In fact, very few of the surviving schools of ninjutsu teach any baking skills at all. However, gingerbread itself is straightforward, and it's likely that the recipes used in the past were similar to modern versions. Remember you'll also need chocolate — presumably melted in a bain-marie — into which to dip the points. 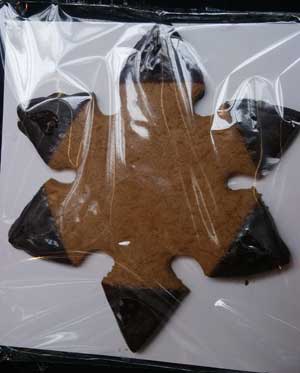 A gingerbread shuriken with chocolate tips (photo taken at Seni 2005). This one looks a little worse for wear, presumably because of the fierce studio lights.